On Tuesday, February 16th we took part together in a movie screening of „Son of Saul” within the Film Discussion Club in SOKÓŁ Lesser Poland Cultural Centre. 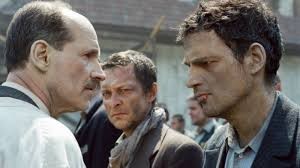 “The debut of Laszlo Nemes is one of the most awarded and discussed European movies of the last year (Grand Prix at the Cannes festival, Golden Globe for foreign language film). A moving, cruel and minimalistic story about every-day reality of the concentration camp, about moral dilemmas and attachment to tradition.

1944, Auschwitz-Birkenau. 48 hours from the life of Saul Auslander, member of the Sonderkommando – a group of Jewish prisoners forced to assist the Nazis in the great machine of Holocaust – short before the revolt outbreak. In reality which is impossible to understand, in a situation with no chances of survival, Saul tries to save in himself what is left of a man he once was.

The movie induced many discussions about cinematic presentation of the Holocaust and the part the Sonderkommando members took in the Holocauste machine.”*

The movie was accompanied by a discussion with Artur Franczak and Łukasz Połomski, hosted by movie expert Karol Szafraniec, in which the historical reality presented in the movie was discussed, as well as functioning of Sonderkommando groups, the course of the Auschwitz camp revolt and aspects of Jewish culture connected with death and burial.